Children and young people (0-24 olds) currently account for nearly half of North Africa’s total population and thus make North Africa the ‘youngest’ region of the planet. The region’s favourable demographic structure and the potential of its young population are decisive factors for a more prosperous and stable future for the North African states. However, unlocking this potential requires an urgent change in several areas. One of the most pressing issues in this regard is youth unemployment. North Africa doesn’t only accommodate the highest percentage of young people worldwide, but also the highest percentage of unemployed young people.

This high population of unemployed young people is a severe challenge to the region. Although significant differences exist between the political and economic structures of North African countries, unemployment, under-employment, precarious and informal work, are all dominant characteristics describing the North African labour markets. In general, the education systems are failing to prepare the youth for the labour market and the economies are not able to generate much-needed employment opportunities.

The following table shows the percentage of youth unemployment in different areas of North Africa in 2018 according to the World Bank: 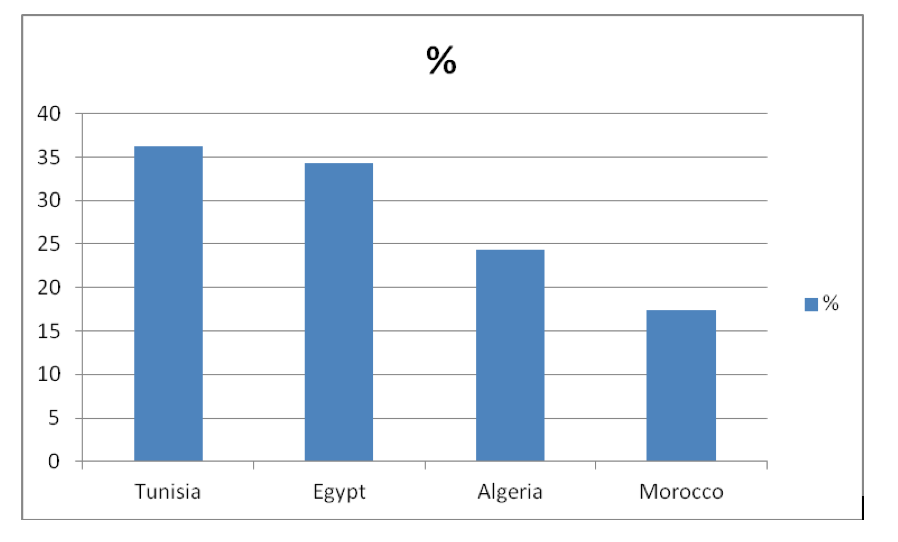 Different studies conducted on the issue at hand have identified a variety of consequences for North African societies that can be linked to the phenomenon of youth unemployment. Conflict, social cohesion and involvement in criminal activities are three most recurrent effects in the current literature.

It is known that a large rate of youth unemployment can make countries more unstable and more open to conflict. Inter Alia research conducted by the African Development Bank in 2013 indicated that significant youth unemployment rates make countries more prone to political instability. Even though a causality between political violence and youth unemployment can’t be established, the case of North Africa confirms the tendency of the latter having a positive influence on political violence. Sociologist and economist Prof. Gunner Heinsohn suggests that in countries with economic inequality, especially young men are more likely to engage in violent conflicts. The Algerian civil war which broke out in the 1990s can be seen as an example for such a conflict.

Large gaps between people’s expected and real economic conditions can also fuel tension and lead to instability and conflict. This has been observed during the popular movements of the Arab Spring, which were initiated by protests in Tunisia, which interestingly is also the country with the highest percentage of youth unemployment in the whole MENA region.

The unemployment among young people in North Africa points to the broader lack of equitable distribution of resources and marginalization. The World Development Report published by the World Bank in 2013 established a correlational link between levels of employment and social cohesion, measured as levels of trust and civic engagement. Being unemployed in this context means more than a lack of income. Not having a job directly leads to a loss of social status, access to social networks and as a consequence oftentimes to a sense of disempowerment.

High levels of unemployment have therefore been found to have a negative effect on social ties and trust in communities. This leads to a situation where young people coming from poor families face far more difficulties climbing the social ladder. In a region like North Africa, this vicious spiral of poverty, where many families depend on the income of their children, results in a phenomenon called ‘waithood’. This term reflects the waste of youthful potential and describes a period of time in which the search for employment of young people often lasts for many years. This delayed transition into the labour market also delays other pathways to adulthood, like marriage, owning a home and civic participation.

The lack of legal pathways to generate sufficient income oftentimes leaves the North African youth desperate for opportunities that promise a better life. This makes them vulnerable to recruitment by individuals and groups who seemingly provide these opportunities. In their search for access to resources, power and privileges many unemployed youngsters (mainly young men), therefore, have fallen prey to criminal networks that usually engage in drug traffic and theft. Many others also have become foot soldiers for extremist groups who manipulate them into committing horrendous acts of violence by promising them to take care of their families financially. Obviously, in the long run, crime is not only costly for the individual engaged in criminal activities but also for a society as a whole, just like all other mentioned consequences are detrimental to the development of any country.

Solving the issue of youth unemployment in North Africa is therefore of key importance to the further development and stability of the whole region. Sustainable and innovative political reforms are urgently needed to secure the peace and prosperity of the North African people.