What is the Model UN Parliament?

Fifty students from Germany, Europe, and around the world will take on the roles of ambassadors in order to debate and negotiate the possible statutes of a parliamentary assembly at the United Nations – a “world parliament.” Moreover, the program comprises workshops and a high-profile final event including a panel discussion in Berlin. The Young Initiative on Foreign Affairs and International Relations (IFAIR) – in cooperation with the UNPA Campaign – will organize this special event for the first time. The Model UN Parliament is a project of the IFAIR Impact Group UN Parliament and takes place under the patronage of Cem Özdemir (Member of German Parliament, co-chairman of the German political party Alliance ’90/The Greens).

What is the Idea of a UN Parliament?

The visionary idea of a United Nations Parliamentary Assembly (UNPA) has been debated in policy circles for some years now. The proposal is to establish a parliamentary body next to the UN General Assembly – as a pragmatic step toward a potential world parliament, based on the example of the European Parliament. Since 2007 the UNPA Campaign has been advertising this idea around the world, drawing support from prominent figures such as former UN Secretary-General Boutros-Ghali and current EU Foreign Minister Federica Mogherini.

How can I participate?

We want you to be part of this new, innovative Model UN project! You will be able to participate in a professional MUN with a topical focus on global democracy, while co-creating the statutes of a new body. In this way, you will not only practice your debating and negotiating skills, but also deep-dive into legal and political matters. This will be an extraordinary experience. The event is organized by the Young Initiative on Foreign Affairs and International Relations (IFAIR) and the UNPA Campaign.
Unfortunately, you are no longer able to apply as a delegate to the Model UN Parliament. However, we invite you to come to the closing ceremony and panel discussion that is going to take place on Sunday, 24 April, in Halle (Saale). We will publish more information on the closing ceremony soon.

For more information on the closed application process, visit the following sites:

Apply to the Model UN Parliament

The Model UN Parliament is a MUN. The term MUN is an abbreviation for Model United Nations . MUN conferences are organized by and for students from all over the world in order to simulate the work of the United Nations. Every year, more than 100 of these simulations take place in various countries around the globe. Participants take on the role of young diplomats in order to experience the work of the United Nations first-hand. Their task is to represent one particular country, chosen beforehand, as realistically as possible in one of the different UN committees or a UN body. The whole conference is conducted in English . As far as negotiating and debating is concerned, the “diplomats” are required to keep in mind and faithfully represent the interests and positions of “their” country. Generally speaking, all participants have to be acquainted with “their” nation’s interests and points of view. When debating, every delegate gets the chance to present the country’s position, make suggestions or offer criticism on former contributions within 1-3 minutes. Conduct is strictly regulated according to the Rules of Procedure . Whilst the simulation takes place, the participants have to communicate extensively and in an outgoing manner: coalitions are formed in the committees, proposals are formulated and have to be revised; finally, so-called “working papers”, summing up the essence of the previous oral debates and negotiations, are drafted. It is the aim of the Model UN Parliament to present the final draft of a statute of a United Nations Parliamentary Assembly. Not only do MUN conferences offer the opportunity of dealing intensively with current problems and issues of world politics; participating in one of them also requires essential skills with regard to negotiating and debating: giving free speeches and succeeding in formal writing, developing the competence to solve conflicts diplomatically, and being able to work out compromises. Participants shall be able to assert “their” nation’s position as firmly as possible, but may still be capable of diplomatic negotiation leading to compromises The latter is indispensable in order to come to a satisfying solution for everybody. On the basis of a profound preparation of the countries’ positions the simulation offers a platform likely to promote intercultural exchange and deeper international understanding.
The United Nations have been criticized for having a democratic deficit. We want to put this discussion about global democracy on the agenda. A real UN Parliament could be a force for peace and justice within the global governance system. We believe that this idea has to be discussed by young people, since it will be our generation facing the challenges of the future. The Model UN Parliament is not just an ordinary MUN. It is the first MUN of its kind, since it will not just pass a resolution, but work on a comprehensive statute for a proposed world parliament. The discussion therefore is not open-end, but directed at a very specific goal – the statute of a future UN Parliament. Furthermore, this statute will serve as a blueprint for upcoming Model UN Parliaments in subsequent years. The statute will be the basis for the Rules or Procedure of those simulations. Therefore, this MUN will have the very tangible outcome of shaping the next Model UN Parliaments. Additionally, the statute will be forwarded to the UNPA Campaign – the largest global advocacy group for a world parliament. This statute and the simulation results will help the campaign in their mission towards global democracy.
The Model UN Parliament will take place from 22 to 24 April 2016, mainly in Halle (Saale), Germany. During the course of the conference, you will discuss the statute of a United Nations Parliamentary Assembly. Since the drafting of such a statute usually takes years, you will have a draft statute as the basis for discussion. In this draft statute, there will be several critical issues unresolved which are central to the proposal of a UNPA. These questions include: How exactly will a UN Parliament be established? What are the rights and obligations of the UN Parliament? What is the structure of a UN Parliament? E.g. is there one world parliamentarian for each 7, 15, or 30 million people? Does each country have a certain amount of members of the UN Parliament according to population? How are the Members of a UN Parliament selected and/or elected? What is the relationship of the UN Parliament to other UN bodies? In the end of the Model UN Parliament, all delegates will vote on the proposed statute. The results and issues of a world parliament will then be discussed in a final panel discussion, which will take place in Berlin. The panelists will include professionals from the political, academic and non-governmental sphere.

Who is responsible for the Model UN Parliament?

The first-ever simulation of a Model UN Parliament delegates’ assembly has taken place in April 2016. Please find the agreed statutes for a UN Parliamentary Assembly here

What is the Model UN Parliament?

Apply to the Model UN Parliament

Who supports the Model UN Parliament? 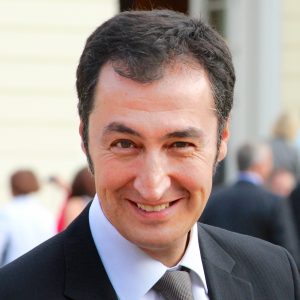 Our partners help us create this unique space to discuss global democracy by supporting the Model UN Parliament. We are especially proud that the project is under the patronage of Cem Özdemir (Member of German Parliament, co-chairman of the German political party Alliance ’90/The Greens). You can find his endorsement and welcome message here.

Furthermore, we are thankful to our donors and partner who finance this project and make it possible for us to bring together students from all over Europe in order to debate the statutes of a ‘world parliament’. Our main partner is the United Nations Association of Germany – UNA-Germany (Deutsche Gesellschaft für die Vereinten Nationen – DGVN) who has not only made a financial contribution but is also a partner on substantial and organizational matters.