In 2019, fires were raging in the Amazon. Meanwhile, “helpless” European citizens watched in dismay as Latin American governments failed to act in the face of this environmental catastrophe. This essay explains how the European Union as a government and as a people shares responsibility for the destruction of ecosystems in Latin America.

Five of the seventeen Sustainable Development Goals (SDGs) defined by the United Nations in 2015, target environmental issues. This reflects a growing concern about the planet’s future. However, ecosystems in Latin America and the Caribbean (LAC) keep being destroyed:  since 1978, 185 million acres of the Amazon, which is adjacent to Brazil, but also Colombia, Bolivia, Peru, Suriname, Venezuela, Ecuador, Guyana and French Guiana have been a victim of deforestation.[1] While the European Commission is an active stakeholder in addressing climate change and environmental degradation, member countries of the European Union (EU) and their citizens fail to identify their responsibility in the 2019 Amazon fires.

Why isn’t deforestation of the Amazon just a “domestic Brazilian issue”, as the Brazilian president Jair Bolsonaro called it in a tweet in August 2019?[2] And why is the protection of the forest a matter of global governance? This article discusses the environmental-economic nexus and the European responsibility in the Amazonian fires. We first present the importance of raw material exports for the growth of Amazonian countries. Then, we show that the recent increase in international demand for agricultural products such as soybean has sped up deforestation in the Amazon through global value chains. Finally, we outline why the EU remains an important stakeholder with regard to deforestation in Latin America.

Amazon countries: growth sustained by the export of raw materials

In the past decade, the LAC region has grown fast at an average annual GDP growth rate of 4 percent between 2003 and 2012.[3] Although poverty significantly decreased from 11.9  to 4.1 percent between 2002 and 2015[4], LAC’s economies developed at the cost of intensive exploitation of land through extractive practices such as agriculture, livestock, mining and logging. Given that LAC countries account for a considerable part of the planet’s biodiversity, natural resources and arable land and span 46 percent of global rainforests[5], we should pay close attention to how these natural resources are managed.

A simple glance at the Atlas of Economic Complexity shows that the positioning of LAC countries in global economic chains depends on their export of raw materials.[6] Looking at the 2018 exports of some Latin American countries that can claim a share of the Amazon provides further insight: In Bolivia, a large share of total exports consisted of petroleum gases (30.13%) Similarly, in Colombia, petroleum oils (crude) represented 28.22 percent of total exports and in Ecuador, petroleum oils (crude) alone amounted to 33.86 percent of the country’s exports. Finally, minerals and agriculture represented 55.65 percent of Brazilian export, while soybeans accounted for 11.71 percent, to mention only a few. Table 1 shows data for the three main export products in Amazon countries in 2018. The specialization in export of raw materials gives these Amazon countries a comparative advantage while making them more vulnerable to international demand.

Table 1: Amazon countries and their most exported products in 2018.

The percentage represents the share in value of the product in the total exports of the respective country. 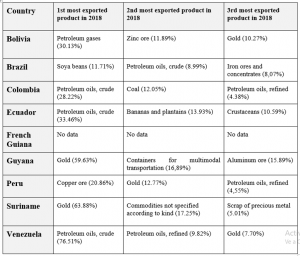 Overexploitation of land in the Amazon: the consequence of excessive global demand

Over the past decades, Brazil increased its agricultural production to respond to growing international demand. Already in 2000, the US-American biologist M. Fearnside commented that the global market forces driving the cultivation of soybean came from outside the LAC region, more precisely from Europe, where soybeans serve as food for cattle; and from Asia, where soy is mostly consumed as oil.[7] In Brazil, soybean production has been increasing steadily. Today, China is by far the main importer.[8] Additionally, imports of soy products into the EU increased considerably in the last decades (Table 2).

Soy production, with a steady increase in external demand in recent years, saw an increased productivity due to the use of genetically modified soybean resistant to fertilizers (in particular to glyphosate). However, Brazil is not suited to meet the large demand: in fact, even the whole planet would not be big enough to meet the global demand if all countries would apply the technology used in Brazil.[10] So why is Brazil the main supplier? Curiously, the European Commission allows the importation of genetically modified products, such as soybean, while it prohibits its cultivation on the mainland of member countries such as France.[11] This makes imported transgenic soybean cheaper compared to locally produced soybean and raises European demand for soy from LAC countries.

Intensive production of transgenic soybeans harms the environment because of widespread use of agricultural pesticides that contaminate water sources and puts biodiversity in jeopardy.[12] It also sends a signal to LAC local farmers that cultivating soybean is profitable and makes them increase their cultivation areas, often illegally: nearly 20 percent of the EU’s 2018 soy imports from the Brazilian state of Mato Grosso are suspected to have been produced in farms where illegal deforestation had taken place.[13] According to the World Wildlife Foundation (WWF), no less than 36 percent of exports associated with deforestation are heading towards Europe in the form of crop and livestock products.[14] This reflects a failure in law enforcement and governance in the Amazon forest and a problem of transparency in global value chains..

The Amazonian soybean is the “hidden” ingredient in global chains of production. According to the WWF, “the average EU citizen consumes 61 kg of soy yearly, 93% (57 kg) of which is embedded as animal feed in the animal products”.[15] Yet most European consumers ignore that soybean cultivation and meat consumption are responsible of deforestation in the Amazon.[16] Regrettably, the meat industry is not sufficiently concerned with the environmental impact of meat production and is not transparent about the origin of the inputs of “locally produced meat”.[17] Surprisingly, even environmental associations are silent about the environmental impact of meat consumption as the 2014 documentary Cowspiracy reveals. This is likely caused by the lobbying power of the meat industry and the curious deaths of more than thousand environment activists in Brazil within two decades.[18] The European Commission does not monitor the consumption of genetically modified soy nor does it have a policy to encourage Europeans to change their highly polluting diets.[19]

While EU’s and LAC’s stakeholders are directly implicated in the Amazon fires, both sides are striving to make the soy supply chain more sustainable. The soy moratorium is a multi-stakeholder commitment (a result of a collaboration of the Brazilian government, industry and civil society) implemented in 2006 to stop the purchase and export of soy from deforested areas after July 2008.[20] Even if the Amazon deforestation is increasing again, the moratorium had a remarkably positive impact throughout the last years. After the 2019 fires gained international attention, NGOs, civil society and enterprises started to implement sustainable commitments. In this period, European investors and retailers warned the Brazilian government about the possibility of divestments and boycotts.[21] Finally, with the “European Green Deal”, a priority action plan, the EU aims at becoming climate neutral in 2050. One of the pillars of the plan is to improve the EU’s green diplomacy, including with LAC.[22]

If, due to conflicts of sovereignty in trade decisions (for instance with the World Trade Organization), the EU cannot prohibit the import of genetically modified organisms (GMOs), traceability of the final product will need to indicate the percentage of GMOs contained and a transparent description of the entire production chain. As was encouraging in the case of Indonesia, main portfolio holders could also monitor the environmental footprint of their products.[23]Both solutions would limit the market availability of products associated with deforestation and enable a bottom-up change from informed consumers.

The case of the Amazon rainforest is a concrete example of why SDGs need to be tackled globally. The EU explicitly addresses climate change (including deforestation) and must therefore bear the consequences of poor governance of LAC ecosystems. Yet, it is also doubly involved in deforestation through global value chains: by its excessive demand for soy to feed European cattle and by its deliberate decision to shift the consequences of excessive demand and therefore over-production to LAC. It can thus be said that the EU, along with other non-LAC countries, is one of the main protagonists in the Amazon fires.

Neither the fires in the Amazon nor the destruction of ecosystems in LAC are a local domestic issue. We strongly encourage European countries to prevent future fires by adopting more sustainable consumption patterns. The EU could achieve this by prohibiting production and importation of transgenic soybean, by enforcing legal transparency in production chains, or even by penalizing consumption of products whose global value chain is involved in deforestation. The EU could also provide an incentive to financial institutions in monitoring supply chains and prohibit import from endangered natural areas. Finally, ending deforestation in Amazonia requires stronger bilateral governance between the EU and Latin America and the Caribbean. There still is a long way to go, but we hope to write an article in a few years’ time, which we will call: “How a collaboration between LAC and the EU ended deforestation in the Amazon”.

[2] In a tweet from August 2019, answering to French president Emmanuel Macron’s call for G7 talks on Amazon fires: “I regret that President Macron is seeking to instrumentalize an internal issue in Brazil and in other Amazonian countries for personal political gains. The sensationalist tone that he uses to refer to the Amazon (even appealing to fake photos) does nothing to solve the problem.”

[11] “Around 100 GMOs and/or their derived products are authorised for import and use as food and feed. These authorisations concern maize, soybean, oilseed rape, cotton and sugar beet. They do not allow the cultivation of the corresponding GMOs.” in  https://bit.ly/3hBMRJF (accessed: 14 July 2020).

[17] Kertész Z. et al. (2014). Opinions of Stakeholders and Consumers on the Sustainability of the Soy and Beef Supply Chain in Latin America and Europe. Bonn: University of Bonn (February 2014).

Ronald holds a Bachelor’s degree in International Studies from ORT University Hélène graduated from the University of Copenhagen, Denmark with a MSc in Global Development. after she obtained a Bachelor degree in Economics from the University of Strasbourg, France. She worked 3 months in La Paz at the INESAD where she became familiar with the topic of green national accountability. During her studies in Denmark, she specialized in Latin American studies, wrote her master thesis in economic anthropology in the Andes and moved to Bolivia. Her academic interests include sustainable development, global health and justice, and gender equality. João is currently working in the Government Relations area in a Belgian chemistry company in Brazil. He holds a Bachelor's degree in International Relations from the Universidade de São Paulo. João previously worked as a junior researcher in a think tank specialized on international negotiations to study the EU-Mercosur relationship as part of the Jean Monnet programme which aims to promote European Union studies worldwide. His main research interests lay within European studies, sustainability and climate change regime, international trade policy and economic agreements.