Why is propping up separatist regimes an integral part of Russian foreign policy? How do de facto states function and what do they have to do with the war against Ukraine? Should the EU reevaluate its relation to separatism?
Find out at IFAIR’s event “Russia’s Invisible Puppet States” on June 25th from 14:00-17:00!

The event will kick off with a presentation by Nikolaus von Twickel (Zentrum Liberale Moderne) on the Donetsk and Luhansk so-called ‘People’s Republics’ – how did they come to be, and how were they instrumentalized for the war against Ukraine.
Continuing, PhD candidate Keith Harrington (Maynooth University) will present a much older case: Transnistria. How does such an isolated place persist over time despite all odds? Why is Transnistria different than other de-facto states? Is Transnistria really the next front of Russian aggression?
Following these presentations, we will hear two critical analyses of European policy toward Russian-backed separatism over the years by Prof. Andrey Makarychev (University of Tartu).

Following all blocks, we will have a Q&A session. Presentations and Discussion in English.
We look forward to learning and discussing with you on June 25th at 14:00 in person at the Gesellschaft für Europabildung – Petersburger Straße 94, 10247 Berlin – (U-Frankfurter Tor). 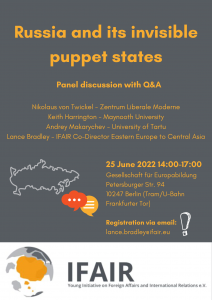