Bilateral trade agreements [1] have been a crucial element for the development of international trade regulation in the last two decades. The regulatory complexity of such agreements strengthened the linkage between trade norms and other trade-related fields – such as environment – and contributed for a comprehensive regulatory agenda. Even though western nations have been actively shaping trade norms, new trade agreements involving other strong regional actors might produce different outcomes in the local and global trade regime.

The Growing Relevance of Environmental Provisions in Bilateral Trade Agreements

The promotion of a regulatory agenda in trade-related issues is not a new phenomenon in the current globalized economy. Multilateral arrangements under the World Trade Organization (WTO) consolidated common global standards in several issues, such as intellectual property rights and investment. Likewise, environmental regulation is a recurrent issue at the multilateral level, either in multilateral environmental agreements (MEAs) or in the WTO agenda for sustainable development and environmental protection (WTO 2018).

Despite the important achievements of the WTO in fostering basic global standards, the complexity of the multilateral negotiations generated deadlocks for the organization’s regulatory agenda (Gantz 2013). In this context, important western economic actors – namely the EU and the US – started promoting bilateral trade agreements as an instrument to not only reinforce economic ties with relevant trade partners, but also to promote their own regulation [3]. Trade agreements outside the WTO scope became, thus, a powerful instrument for trade norm diffusion [4]. 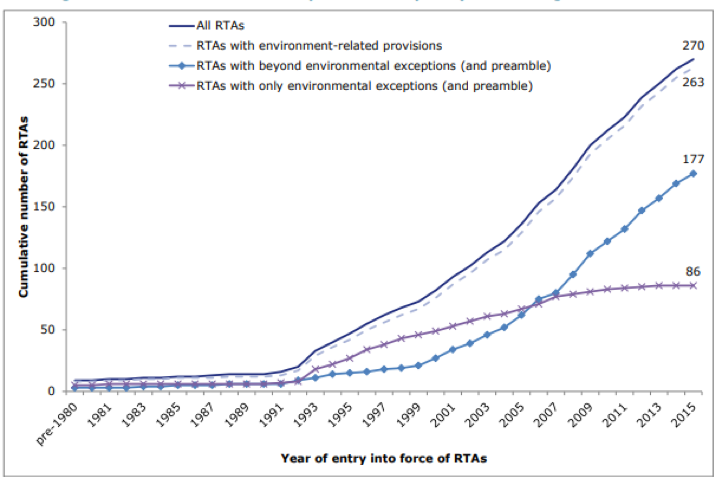 Finally, the trade agreement between South Korea and China, singed in 2015, contains a total of 104 environmental provisions. This impressive number of provisions, especially if compared to the previous agreements signed by these countries, raises the question as of the motivations behind this increase. This article analyzes the hypothesis that previous agreements between South Korea and western actors (namely the EU and the US) influenced this trade agreement.

The Overlap among Korean Trade Agreements

The arrangements between Korea and its western counterparts show a robust regulatory content in environmental issues. The trade agreement with the EU, signed in 2010, contains 82 environmental provisions, and the agreements with the US [6] totalize 118 provisions. As shown in Table 1, these agreements regulate mostly environmental protection, the limits of regulation (“regulatory space”), and implementation matters. This pattern is also observable in the trade agreement between Korea and China. However, comparatively, this agreement shows more interest in “development” and “coherence” issues than the previous agreements.

Table 1. Number of environmental provisions in the trade agreements between South Korea and China, the EU, and the US, divided according to the regulatory field.

Table 2. Share of overlap among the South Korean trade agreements with China, the US, and the EU (%).

Even though the number of provisions tackling each topic already shows some discrepancies among the agreements, the shares of overlap (displayed in Table 2) highlight important insights into the regional trade governance. First, provisions in the China-Korea agreement are more similar to the EU-Korea agreement than the US-Korea one. This higher overlap is observable in most of the topics, with the exception of “coherence” and “development.” Second, the data indicates that the Korean agreement with China follows some global standards, since 44% of the provisions of the China-South Korea trade agreement overlaps with both the EU and US agreements. Nonetheless, 56% of the agreement differs from the standards diffused by western economic actors, pointing to elements prioritized in the Asian trade and environmental regimes.

Two categories present a share of overlap lower than 30%: MEAs and development. When looking closer into the regulatory field MEAs, it can be seen that each trade partner has different priorities, reinforcing provisions from different multilateral agreements. For instance, while the EU presents provisions related to the United Nations Framework Convention on Climate Change (UNFCCC) and the Kyoto Protocol, the US is more interested in the Convention on International Trade in Endangered Species of Wild Fauna and Flora (CITES) and the Whaling Convention, and China requires the implementation of the Convention on Biological Diversity (CBD) and the Nagoya Protocol. Thus, the EU shows more concern to climate change, the US to the preservation of the fauna and flora, and China to the use of genetic resources.

Likewise, the category “development” presents similar differences. While the agreements with the EU and China promote the equitable sharing of benefits arising from use of genetic resources, the arrangements with the US and China foster technical assistance, training or capacity building. However, only the agreement with China has regulations on the consent from the appropriate authority prior to accessing genetic resources and on technology transfer in the field of environment.

The China-Korea agreement is an interesting case of how bilateral trade agreements have been promoting environmental regulation. It shows that environment is a growing concern in the trade relations in the region and follows a global path not only in the number of provisions dedicated to this issue, but also in the topics covered. Nonetheless, the fact that only 44% of the regulation in the China-Korea agreement overlaps the regulation in Korean agreements with western counterparts indicated that the regional environmental regime follows its own priorities. Thus, the Korea-China agreement shows that some topics, such as genetic resources, are more relevant for Asia than to other regions. This analysis points to the capacity of the trade regime to change environmental protection and shape regional regulation according to local interests. Moreover, it shows that norm diffusion from western nations is relevant for the China-Korea FTA. However, the regionally promoted norms are not completely congruent with the “western norms”.

[2] The Trade and Environment (TREND) Database is provided by Morin et al. (2018). It presents all environmental regulation in trade agreements, allowing an easy comparison among them. A full description of the categories of environmental provisions used in this article can be found at the TREND Analytics website (Berger et al. 2017).

[3] See, for instance, Moerland (2017) for a discussion on the regulation on Intellectual Property Rights in bilateral trade agreements as part of a “package deal.”

[4] Norm diffusion is “the movement and adoption of norms across political borders.” (Jinnah & Lindsay 2016: 45)

[7] Including the US-Korea AEP