The global crises of 2015 – Ukraine, Syria, Euro-Crisis, just to name a few – determined not only international politics and public debates but also IFAIR’s work in promoting the engagement of the young generation in foreign affairs. In the fifth year since its foundation, IFAIR realized more projects than ever before, increasing its public outreach as well as its professionality as an organization. The number of IFAIR members increased by 26 percent to a total of 121 and the Think Tank grew to 350 submissions, providing a platform for policy analyses, debates, and perspectives from all over the world.

The three Impact Groups EU-ASEAN Perspectives, Trilateral Peace Talks – Germany, Russia, Ukraine, and Arms Trade were the key projects of 2015. In addition to that, 15 members of IFAIR held a so-called fire-side-talk with Undersecretary of State Dr. Born to discuss career possibilities in foreign affairs. 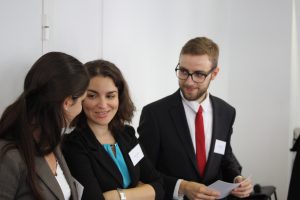 The Impact Group EU-ASEAN Perspectives – Part 2 took place in March 2015 in cooperation with the European Institute for Asian Studies and the EU Centre in Singapore.
Pioneering the online-meetings that become normal in today’s world, we at IFAIR already made use of such tools back in 2015. As part of the Impact Group, 20 students and young professionals from South & East Asia and Europe met online for a workshop to discuss current issues of EU-ASEAN relations. The policy paper which they developed in the course of the virtual meeting was later presented to representatives from politics, diplomacy, Academia, and civil society during a delegation trip to Brussels. The paper was also taken up and discussed by several public institutions and governments within the EU and ASEAN.

Together with the Friedrich Ebert Foundation, the Hertie Foundation, and the Foundation West-Eastern Encounters, the Trilateral Peace Talks brought together 30 young academics and civil society 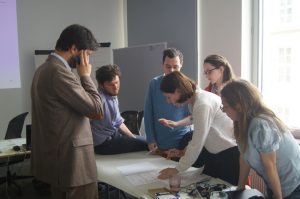 representatives from Russia, Ukraine, and Germany in Berlin for open exchange about the crisis in Ukraine. The four-day event aimed to work on common grounds regarding origins, media coverage, and possible solutions for the armed conflict between Ukraine and Russia. The results of the project were presented to the public in an innovative format at BMW-Stiftung Herbert Quandt in Berlin.

In the light of the controversies about German arms support for the Kurdish Peshmerga, the Impact Groups Arms Trade and the Chair for Empirical Political Research and Policy Analysis of the University of Munich put together an expert panel to discuss decision-making and ethical dimensions of weapon trade. 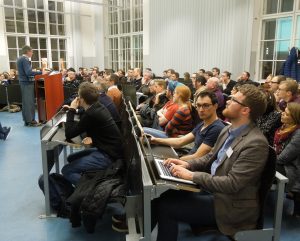 Siemon Wezeman, a senior researcher with the Arms and Military Expenditure Programme of Stockholm International Peace Research Institute (SIPRI), and Jan Grebe, a researcher on arms exports controls at Bonn International Center for Conversion (BICC) were the keynote speakers of the debate. Together with Prof. Dr. Paul W. Thurner, professor for Empirical Political Research and Policy Analysis at the University of Munich, and Lukas Hafner, student and author of the winning contribution to IFAIR’s essay competition, they held an insightful debate in front of 95 people.

With so many projects, IFAIR broadened its network in 2015 and therewith set the foundation for further projects in the years after.