Fasten your imaginary seatbelts as we travel back to 2014, a year that marked the beginning of one of IFAIR’s oldest and still active Impact Groups: EU-ASEAN Perspectives. As the name suggests, this travel takes us to Southeast Asia – at least something to calm the Wanderlust, in times of travel restrictions, right?

The Impact Group EU-ASEAN Perspectives brings together young people from the EU and ASEAN to discuss current issues and develop proposals for the future of interregional relations. What emerged as a thought experiment for better use of online opportunities, became a complete success.
With its EU-ASEAN-Perspectives-Dialogue (EUAP), IFAIR created a network of students and young professionals interested in debating empirical and normative questions of EU-ASEAN relations. Thereby, the Impact Group aims to close the gap between academic and policy discourse. To this end, the participants – a team of master’s students, young researchers, and young professionals from eight different countries in Europe and Southeast Asia – exchanged their perspectives on interregional issues via online formats. This complex project was carried out through communication technologies such as Skype, Facebook, and GoogleDocs with a relatively small financial budget. Therefore, it also served as a pilot project to rethink and implement new and more flexible ways of knowledge transfer and dialogue formats. What seems barely groundbreaking in current times in which remote work and online communication have become the new normal, was back in 2014 innovative and progressive ways to organize dialogue and workshops. 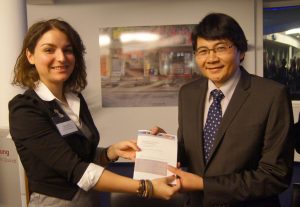 The results of the online exchange were consolidated in a policy paper on the subject of “Does the EU miss out on the Asian Century?”. In 2014, the results were presented in the German Bundestag as well as in a final panel discussion at the BMW Foundation Herbert Quandt in Berlin.

Another highlight in 2014 was IFAIR’s participation in the “Review 2014” initiative of the German Federal Foreign Office with the aim to initiate a debate on German foreign policy and its future with citizens. Two IFAIR team members, Kilian Spandler and Hanna Pfeifer reached the final round of an essay competition with their essay “Building complexity instead of reducing it – Against a policy of new German responsibility”. They were then invited to Berlin for a meeting with Foreign Minister Steinmeier in October to discuss their views. Shortly afterward we dealt with the topic in a more specific way in Munich during a panel discussion on German responsibility in the Israeli-Palestinian conflict. We still have great memories from a lively exchange between the more than 200 visitors and the high-level panelists from the German Federal Foreign Office, the Israelitische Kultusgemeinde Munich, and Upper Bavaria, the German-Palestinian Society of Germany, and the Bundeswehr University Munich.

If our imaginary time travel inspired you to become a part of IFAIR’s EU-ASEAN network: the Impact Group is currently conceptualizing its fourth episode. Stay tuned for more information!