2017 – Remembrance and memory for reconciliation and change

2017 – Remembrance and memory for reconciliation and change

The year of 2017 remarks a special year for both IFAIR and international politics. In various countries, among them Germany, France, the Netherlands, South Korea, Iran, and Chile, important elections took place. Following an increasing interest in foreign affairs and international relations, the IFAIR community increased by more than 25 percent and the core team gained many new members In line with IFAIR’s purpose to promote the engagement of young people in this field, the two Impact Groups “Common Remembrance, Future Relations” and “Memory as a Tool of Change” were founded in 2017. 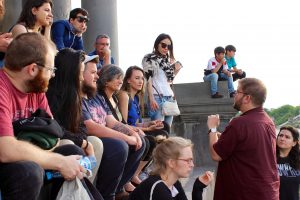 Impact Group members during an excursion in Armenia

The burden of the past and blind spots in the construction of national historical truths often manifest in obstacles to intergovernmental cooperation. However, the mutual exchange of societies’ experiences and their understanding of past events can facilitate processes of remembrance, reappraisal, and reconciliation. The Impact Group “Common Remembrance, Future Relations” aimed to reduce images of the other to initiate reciprocal learning processes in remembrance, commemoration, and reconciliation work, fostering intercultural cooperation through collaborative projects and exchange. In cooperation with the Nongovernmental Organization (NGO) Armenia Progressive Youth (APY) and
under the patronage of Michael Roth, Minister of State for Europe
at the German Federal Foreign Office, 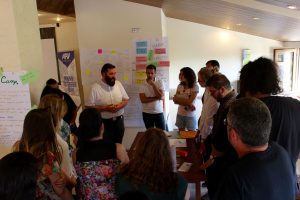 Participants during the introductory workshop in Yerevan, Armenia in May 2017

IFAIR brought together twenty NGOs from Armenia, France, Germany, Israel, and Turkey in Yerevan, Armenia. The participants developed their own projects,  exploring various forms of remembrance, and fostering the dialogue between the different cultures. In the course of the project, eight teams were formed, planning their joint projects.
The three-part Impact Group started with an introductory workshop in Yerevan in May 2017, followed by work meetings of the group partners over the summer. In September 2017, the final meeting of the entire Impact Group took place in Berlin. This event provided a forum to exchange ideas about the work shadowing, to discuss challenges of the work of NGOs regarding remembrance, reappraisal, and reconciliation as well as future perspectives. 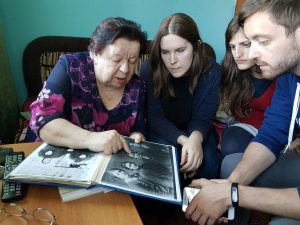 The second series of IFAIR’s Impact Group “Memory as a Tool for Change”, supported by the German Federal Foreign Office, brought 14 students from Austria and Germany to Western Siberia. Together with participants from the region, they spent two weeks discussing Russian commemorative culture and today’s reappraisal of Stalinist terror. Visiting different places of remembrance and talking to historians and experts, participants discussed how contemporary Russian society and politics commemorate the terrors of the last century, including forced displacement and the system of prison and labor camps.
The group was particularly interested in learning more about the phenomenon of increasing Stalin nostalgia, and why certain events become part of cultural memory while others are dismissed, often by communities of shared memory themselves. Notable highlights were meetings with contemporary witnesses, an excursion to two labor camps along the Transpolar Railway, and the collection of essays in which participants processed their impressions.