Syria, Colombia, Brexit, the election of Donald Trump – 2016 remarks a year full of challenges for the global order and foreign affairs. For IFAIR, these events presented an even greater motivation to promote the engagement of the young generation in international relations, which led to the formation of four Impact Groups: EU-ASEAN Perspectives, Memory as a Tool of Change, United Nations Parliament, and LACalaytics.

In cooperation with the German Federal Foreign Office, the European Institute for Asian Studies, and the KANITA Center for Research on Women and Gender, the Impact Group EU-ASEAN perspectives brought together a delegation of 13 participants to discuss gender equality with civil-society and political actors in Brussels, Belgium. The developed policy paper included recommendations for politicians of both the European Union and the Association of Southeast Asian Nations.

With the European University Viadrina, the memorial Deutscher Widerstand, the memorial Sachsenhausen, the Yugra State University, and the memorial Topographie des Terrors as project partners, the Impact Group Memory as a Tool of Change brought together 13 Russian and 13 German students. During the eleven-day exchange program in Berlin, the students developed strategies to deal with the memory culture of the Holocaust in Germany, finding also transfer points to the history of violence in totalitarian Russia. In the course of the program, the students visited the European University Viadriana,
performed a research trip to the memorial place Sachsenhausen and held a panel discussion at the memorial Deutscher Widerstand. 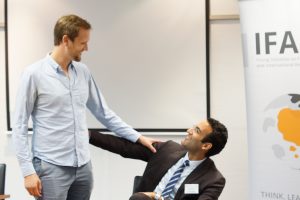 In the course of the Impact Group United Nations Parliament, a discussion of the practical implementation of a parliamentary assembly at the United Nations, as well as a theoretically driven debate on the pros and cons of a world parliament, took place. During the simulation “Model United Nations Parliament”, 50 international participants slipped into the role of a national ambassador and negotiated possible terms and statutes of a parliamentary assembly at the United Nations. Under the general topic of democratization of international politics, lecturers, students, and representatives of civil society and the church discussed the possibilities and the necessity of a world parliament for the global order. Partners of the Impact Group included UNPA-Campaign, the United Nations‘ student group of the Martin-Luther University Halle-Wittenberg (MLU), Evangelical Academy Berlin, Studienstiftung des Deutschen Volkes, Deutsche Gesellschaft für die Vereinten Nationen e.V, Vereinigung der Freunde und Förderer der MLU, and Studierendenrat MLU.

The Impact Group LACalytics brought together 46 students and young professionals from 23 European,
Latin-American, and Caribbean countries. As bi-regional teams, they developed and published interdisciplinary policy papers about regional challenges and developments. In October 2016, IFAIR invited the best authors to a final conference in Hamburg, Germany, organized in cooperation with the EU-LAC Foundation and the Senate Office of Hamburg. During the four-day conference, the participants presented the findings of their articles and had the opportunity to discuss these with actors working in the field of EU-Latin America relations. The twelve best articles were published in the trilingual report “EU-LAC Cooperation in the 21st Century: Combining Efforts in a Globalized World”. Due to its success, LACalytics was repeated twice and a selected number of articles were republished in the course of IFAIR’s Latin American and Caribbean Weeks in September 2020.